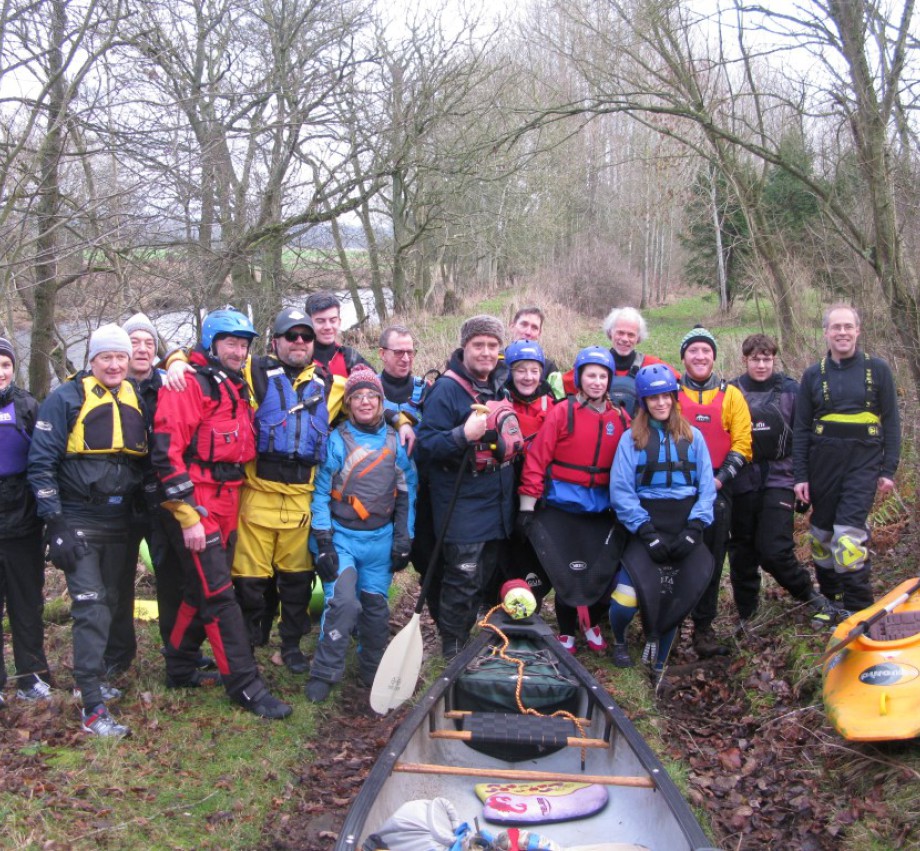 We did have a Meets Organiser in the early years but it quickly became a thankless chore! Mobile phones hadn't really taken off the way they have now - email wasn't quite as all-pervasive either. So the Meets Organiser position went unfilled for a considerable time - until now. The Meets Organiser is back, big time, so catch up on trips you may have missed here.

13th April 2019. Here are some photos of our April club paddle (Sat13th Apr), RIver Earn, Comrie to Crieff. A mix of kayaks and open boats with some paddlers joining us from Grampian Open Boaters. It was a nice bright morning but the air temperature was cold and the wind biting. Water levels were low which made for a challenging start under the road bridge at Comrie. The broken weir was safely negotiated by all paddlers - especially well done to Chris his first white water rapid. There are many trees in this section of the river, due to flooding and beaver activity. Many of the river bends were scouted before running as from upstream the safest route was not always obvious. Huge high shingle banks have built up along the river, ideal for dry lunch stops. The headwind / sidewind proved problematic, more so for the open boats, so some of the paddling lines were circuitous to say the least, although I did catch Rachel and Mike synchronising their ferry glides very elegantly! This section has a wild, remote feeling about it, with amazing upstream views of the hills (yes I was paddling the wrong way round at times - all intended - ha ha !). The last section was a brain teasing rock evading exercise. We were a tired bunch of paddlers by the end, never under estimate a relatively short section (~11km) of river, it is amazing what it can throw at you! Good company as ever, had a lot of fun!

24th March 2019. Here are some photos taken on the March (Sun 24th) club paddle on the River North Esk. It was a wet and icy start getting all the boats down to the beach first thing Sunday morning. Fortunately, by the time we had completed the car shuttle there were blinks of blue to be seen in the sky. As ever with the North Esk the water levels are very changeable, the river was visibily dropping over the course of the day. This made negotiating the first set of rapids difficult as the water was shallow over the rock shelves. We had fun (?), some less than others bouncing our bums over the rocks but we all made it past the tree and hopefully onto some better flowing water. There were primroses out with their pretty faces turned to the sun on the side of the banking as we paddled down. The river could only be described as gnarly, not very forgiving for any of us but especially challenging for the novice kayakers- well done for keeping up your concentration. With some coaching by Pete on ferry glides across a wide stretch of water it was time for lunch on the grassy bank in the sunshine. Great flapjacks made by the McLaughlin's giving us the energy to get down the next section. Frances christened the front seat of my canoe later on - my canoe wasn't sure what way it was meant to be going - yes we ended up going backwards a few times but hey ho we had a laugh. Northwater Bridge may have been the better choice of take out on this occasion with the water levels low it was a long time in coming to paddle under the pylon line but we made it onto Marykirk Bridge. With a concerted effort from everybody to portage the boats up to the roadside it was time to tuck into chocolate/coconut cake made by Frances. This was a great day out on the water made even better by the home baking and good company. Thanks to Alan for organising the kit and Iain for car shuttling even though they were not able to paddle. Look forward to seeing you on the April club trip.

Last summer, under the auspices of club member Colin Tannock, a series of Time Trials were held at Forfar Loch. The aim of these events, taking place each Wednesday evening, was twofold. firstly, to enable members to prcatice and improve their paddle technique; secondly, to see if they could pit themselves against other members and the clock in a race around a pre-determined course.

Angus Canoe Club is a charity registered in Scotland (SC046888)

If you have any queries or wish to find out more, please contact us:

Get social with us.